The most common way to run tests in a project is to run rspec in the terminal. This runs tests for all examples in the project. Sometimes, this is not what we want.

During development, we don’t want to run the whole test suite every time after a change. Most of us want to run only tests related to changes we’ve made to save time.

If you’re new to RSpec, here’s a quick introduction to testing with RSpec.

We can run specific RSpec tests by:

How to run a single RSpec test file

To run a single Rspec test file, you can do the following to run the tests in the your_spec.rb file:

If you want to run a single RSpec test file in addition to other test files in another folder, RSpec allows you to pass multiple arguments to it. For example, you can do $ rspec spec/jobs spec/models/your_spec.rb to run all the tests from the jobs folder in addition to specs found in the your_spec.rb file.

How to run all Rspec test files in a directory

Similarly, you can pass as an argument to the rspec command the path to a folder or folders to have RSpec run all the test files in the folder to run the tests found in the jobs directory like this:

And to run only tests found in the jobs and services directory:

2. Sections Of An Example Group

Henceforth, let’s use the spec file and class below as our test sample.

RSpec allows picking one (or several) section of an example group to run, allowing us to run something like $ rspec person_spec.rb:21 where 21 is the line number of the section we want to run. The line number could fall on any of these RSpec methods: describe, context, it or expect and RSpec will run that section. If the line falls on an empty line, RSpec will run the closest (from the top) it block of the test file. If the blank line is above all the test examples, RSpec will run all the tests.

3. The Description Of An Example

Running $ rspec person_spec.rb -e "greet" -fd in on our spec file will return

There’s only one example that has “greet” in its description.

4. Focusing On An Example

In a typical Rails project, this might go in your spec_helper.rb file. Once this configuration is in place, you can add f to describe, context or it so it becomes fdescribe, fcontext or fit and RSpec will “focus” on that example/group. Doing:

RSpec has $ rspec file_name_spec.rb --only-failures, very handy when you’re only interested in running tests that fail so you can work on fixing them. But to keep track of which tests failed the last time you run the tests, RSpec needs yet another configuration that will tell it where to store information on which tests failed/passed.

If you’re working with Git, you might want to add some_file.txt to .gitignore.

It’s essential to run this file once without any flags to record the statuses of all examples – this is how the content looks like after we run our tests for the first time with some (deliberate) failures. 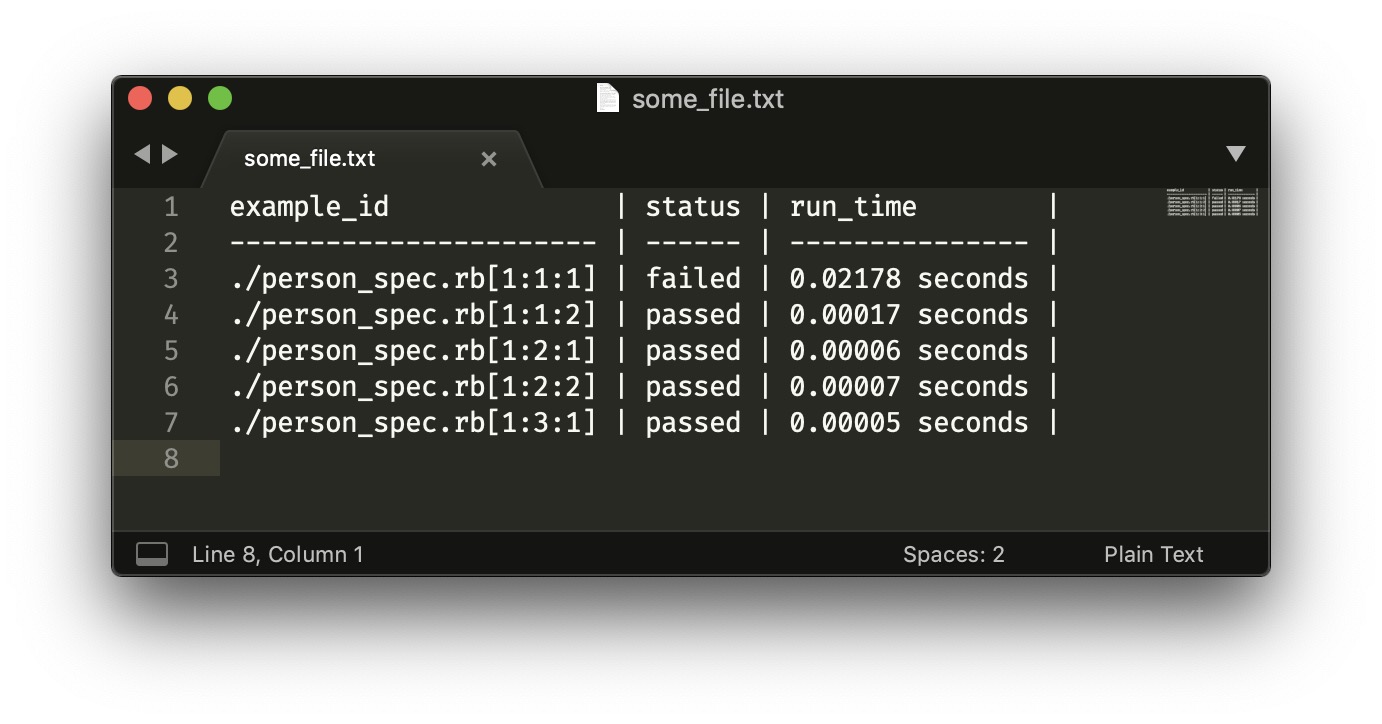 Once the first run has recorded the statuses of the tests, we can then run $ rspec person_spec.rb --only-failures to run just the failing tests and re-run after we’ve made changes to our code to see if we’ve been able to fix the failure we’re tracking, if it has, its status will change to “passed” in the file that we configured for RSpec to do the tracking.

You can tag examples/groups with a hash (RSpec calls this “metadata”, the focus: true in the tests you saw above is a metadata example). The hash can contain arbitrary key/values of your choice. For example, let’s say we want to mark some tests as important. We can do so by altering our tests to add an important: true so it looks like the following:

With this change in place, we can run $ rspec person_spec.rb --tag important and expect to have only 3 examples running instead of 5.

Armed with these I’m sure we can save a lot of time, time that we can invest in doing other things. Picking tests you want will speed up development. I recommend doing this with real work.