TLDR: A vessel called Mimemagic run aground, blocking a vital trade route and halting traffic for all others and forcing a reroute for some for six days. 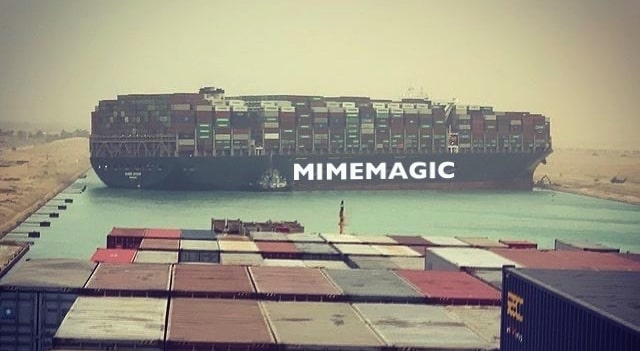 Jokes aside, what happened in Rails last week is unprecedented, at least since I started working with Rails 4. Unless it did happen and I missed it.

As far as I understand, it was an issue with licensing. For some, licensing is not an issue of concern; a few people grab any open-source code available and use it anyhow they want. I was one of these people, but I’ve come to learn to pay more attention to the kind of dependencies I use and the licenses attached to them.

This blog post is a summary of what I think is happening. This post is a compendium of the timeline of events, solutions people have found to circumvent the yanking of mimemagic and how open-source licenses work.

While entirely unrelated, six days ago, a massive cargo ship got stuck in the Suez Canal. The memes with ships is based on this vessel, Ever Given. The reason people couldn’t ship has nothing to do with this ship though.

The maintainer of shared-mime-info, Bastien Nocera, filed an issue on mimemagic to resolve some licensing inconsistency. shared-mime-info is a package that contains the core database of common MIME types that mimemagic uses.

Now, shared-mime-info is under a GNU General Public License (GPL) and mimemagic, prior to version 0.3.7, was incorrectly licensed under MIT.

When Bastien reported the violation, Daniel Mendler, the creator of mimemagic, briefly changed the license on mimemagic to GPL-2.0, forcing him to yank all early versions of the gem, which were under MIT.

Bastien reported a violation. Daniel followed through with fixing the problem, bringing all CI builds of Rails applications that had ActivaStorage (which depended on marcel, which depended on mimemagic) to a grinding halt.

The dependency hierarchy looked something like this for some:

For a brief moment, there was chaos. Some folks started demanding and commanding as if someone owed them something. Others tried to help.

How Developers Worked Around The Issue

I heard people suggesting getting rid of ActiveStorage if your app didn’t use it.

Some got the MIME type database on their systems through Homebrew and updated mimemagic, which looked in some paths, including where Homebrew may have installed the database.

Linux users did the equivalent for their distros.

Others suggested grabbing a copy of mimemagic and putting it into /vendor/gem and then updating the Gemfile to something like:

Another workaround was referencing the yanked gem. Yanking a gem only removes the code from the host, Rubygems. Github keeps another copy.

With all these slick interim fixes floating around, the Rails core team was working to figure out a more lasting solution. What they ended up doing is providing a bugfix release in Rails version 6.1.3.1 that removed the dependency on mimemagic in marcel, an ActiveStorage dependency.

The Rails core team went with Apache Tika. Apache Tika provides capabilities for the identification of more than 1400 file types from the Internet Assigned Numbers Authority taxonomy of MIME types, similar to what share-mime-info provides but with a permissive license – Apache License-2.0.

Before you start this section, here’s a disclaimer: I’ve never been to law school, and I’m no open-source licensing expert. Almost everything from this point forward is referenced from other resources that I link to at the end of the post.

With that out of the way, a software license is a grant of permission by the owner of a legal right (usually the creator of the code) to software (the licensor) for another person or entity (the licensee) to do something with the software.

The fundamental purpose of open source licensing is to deny anybody the right to exclusively exploit a work. Andrew M St. Laurent

When a user buys a packaged product, most often than not, they are bound by what’s known as a “shrinkwrap contract” or a shrinkwrap license. A shrinkwrap license asserts that, by opening the plastic wrap of the product, the consumer is bound by a contract under which they cannot:

The foundation of open-source licensing is to abolish these restrictions. The freedom to copy work and create derivatives from other people’s works means different things to different groups of people. This has given rise to a wide variety of licenses in the open-source field.

Among the numerous licenses are MIT and GPL, which fall under different licensing categories: Permissive and copyleft.

A permissive software license has minimal restrictions on how the software can be used, modified, and redistributed; like MIT. In other words, this type of license lets you do anything you want with the software as long as you provide attribution and don’t hold the creator of the software liable in case something goes wrong.

On the other hand, there’s a copyleft license. An example of such a license is the GPL. A copyleft license is a bit more restrictive. These type of licenses allow you to modify and freely distribute software, but with this freedom, you’re required to preserve these same rights in derivatives, i.e. code that based your work on. 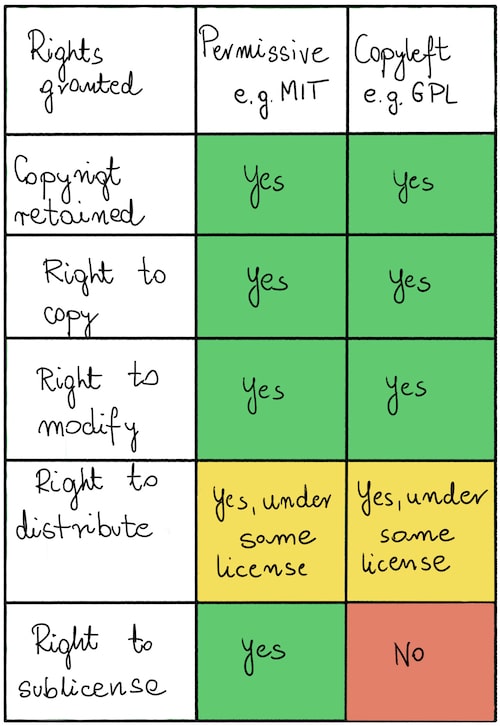 You can tell from the image above that the difference between a permissive and a copyleft licence is the right to sublicense. What this means is, licensee or a second party can’t relicense a GPL-licensed code. i.e. you can’t grab and use a GPL codebase into your MIT codebase.

A Brief History Of GNU GPL

Richard Stallman, the original writer of the GPL license, worked on a Lisp interpreter that Symbolics Inc. (a now-defunct computer manufacturer) asked to use. Stallman gave up his version of his work on Lisp to Symbolics, granting them all rights.

When Stallman wanted to see how Symbolics had improved the Lisp interpreter, they refused. Stallman was like, “WTF!?! You inherited free software from me. Now you deny me access to see what you did with my software? This shit needs to stop!”

That is to say, proprietary modifications will not be allowed. I want to make sure that all versions of GNU remain free. Richard Stallman

Stallman’s actions made the concept of “copyleft” mainstream, hence the reason we now have protective licenses like GNU GPL against permissive ones like Apache and MIT. The principle of demanding licenses of derivative works to be based on the original is called generational limitation.

Rails Is Guilty Of No License Violation

You can’t blame Rails for what happened with mimemagic for two reasons:

The United States Copyright Act of 1976, 17 USC. Section 101 states: A “derivative work” is a work based upon one or more preexisting work. I believe this definition is true in other jurisdictions, and to my understanding, Rails didn’t violate GPL because it imported a library that was a GPL derivative. Rails itself isn’t a derivative, they can cut out the “tainted” libraries anytime.

Until recently, mimemagic had directly imported the shared-mime-info database directly into the gem, making it a derivative of shared-mime-info. Daniel Mendler was right in yanking earlier versions of mimemagic to protect himself, even if he did so without notice.

Gratitude To Those Sustaining Open-Source

Amidst the short-lived brouhaha to the yanking emerged Jon Wood, who single-handedly carried many developers on his back to a solution. The Rails community is happy to have such folks around. For his efforts, we’re thankful.

Of course, the Rails Core Team, as always, promptly found a database with a permissive license to avert the problem. Kudos to the Rails team!

Ever Given meme: h/t @mahemoff

Follow me on Twitter to explore Ruby, JavaScript and web technologies. Consider subscribing to my newsletter or buying me a coffee if you found any of my content helpful.